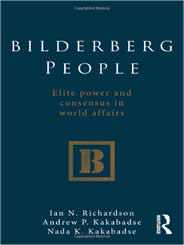 Professor Andrew Kakabadse, co-author of ‘Bilderberg People,’ has unique access to the annual Bilderberg conference and has interviewed many of the key principals who attend.

Over 11-14 June 2015, leaders of multi-national conglomerates met with heads of state at Telfs-Buchen, Austria for Bilderberg.

Shrouded in secrecy this annual conference for transnational elites is often characterised as the most important and influential gathering you’ve never heard of.

Bilderberg is one of the most influential bodies in the world. Established in 1954, its intention was to prevent future wars by focussing on European and American interests.

Why all the secrecy? Well, there are 140 chairmen, CEOs, representatives of major banks and world leaders in attendance, who terrorists would undoubtedly like to attack given the opportunity.

The Bilderbergs are probably the most influential global network of all time and consider it an honour to be invited. They see attendance as recognition for their achievements and contributions to world affairs.

With no agenda tabled or minutes taken, Bilderberg also allows participants to talk freely, exchange ideas and work towards a consensus outside of public and media scrutiny.

While transparency is preferable, their logic is sound. Openness would restrict conversations and expose discussions to lobbying. Ironically such an approach would likely lead to another Bilderberg being formed in the background.

Should we be concerned? On paper, Bilderberg is innocent. The more you can get different countries to address issues before they turn to conflict, the better. At the same time, when leaders adopt a set way of thinking, they are less likely to attempt radical solutions as the world changes.

The Bilderberg people we have talked to are quite genuine. Most don't understand the conspiracy bit because, they say, they simply go to meet people with varying views.

At the same time Bilderberg is clearly influencing and establishing how wealth is thought about on a global basis. What we see and accept as normal and never question doesn’t occur by accident.

We call this smart power’ or ‘shaping.’ It is not about having a definite plan to make a specific investment or conspire against somebody or something. It’s more about arriving at a consensus around a position, which then infiltrates its way into society.

Whatever the influences of Bilderberg, water, food and security are in decreasing supply, and more people are getting poorer. We could have twice the population and still have more food and water than we need, but there needs to be a paradigm shift in thinking, moving us from short to long-term capital investment.

For example, in the UK the City demands results within three-month quarters. How can you possibly deal with housing depravation in this time? You can’t, and part of the reason is that Bilderberg's discreetly champion transactional, short-term capital.

Yet another suggests the event itself has become a ‘self-congratulating, irritating body of people who tell each other they’re beautiful.’

This is why Bilderberg is so influential. The lure of being invited, and seduction of being invited back again, shapes a mindset where attendees see themselves as being welcomed into the inner circle of the transnational elites.

Once established, this message becomes so normal that any alternative perspective is banished from heart and mind. We now face the danger of transactional debt-based capital being the global governance norm, with all the associated concerns of poverty and inequality following in its trail.

Bilderberg People is co-authored by Andrew and Nada Kakabadse, and Ian Richardson.