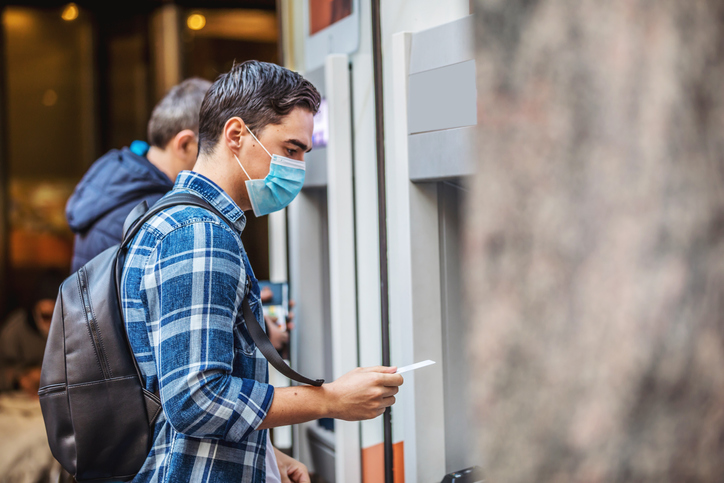 The dangers posed by Covid-19 could be overtaken by fears surrounding finance, employment and economic ruin. An exit plan is urgently needed, warns Andrew Kakabadse, Professor of Governance and Leadership at Henley Business School.

Queuing at the bank now is much the same as going to the supermarket - everyone shuffling in line, separated two metres apart from each other. The other noticeable differences are that my bank opens between 10am and 1pm, and only two customers can go in at any time.

Is there anger? Not so much. In my queue it seems to be more fear and frustration.

"I'm not earning but do you know how many are pressurising me to pay the bills?" says one, quickly prompting a second commentator: "My housing association has only got limited staff but they're demanding I pay my bill on time or else!" A third joins the chorus: "I'm one of the self-employed. There's loads of us but I'll get a pittance from the government."

In many ways, this queue captured what appears to be the developing mood of the country.

Whether information is true or false is quickly losing its relevance. Resentment ran through the queue. The overwhelming concern was the worsening nature of people's finances, while Covid-19 itself barely got a mention.

My academic and professional contacts express similar views: "I've got just enough for this next month. The contract we discussed, will it take off?" My friend already knew the answer. The contract had been cancelled. With no other work on the horizon, his call was more one of desperation.

What is brewing is a deep-seated fear over how no work means no income, rising debts, and families who are left deeply vulnerable.

To make matters worse, bullying is now more evident than ever.

"I just can't sell the books or other materials, but my boss is still blaming me. He's threatened that I've got to improve, or it's my job." The words of a publishing company executive are similar to those of a self-employed PR advisor: "My clients agreed a way forward, then saw the results and lashed out. I was honest with them from the start, but they still blame me for what I told them would happen. Now they want blood and demand I work for free. What can I do? I have no other money coming in."

For an increasing number of people, Covid-19 is something happening in the distance or on TV. What is at the forefront of their minds is a bleak future, marred by debt and likely unemployment.

Back in the queue the conversation flowed onwards: "I can't feed my family. What am I going to do?" said a single mother. Then a snappily dressed young man puffed up: "I'd rather get Corona than put-up with all this lockdown stuff."

Astonishingly a ripple of approval ran through the line. "Yeah, me too!" Then an elderly gentleman quietly enquired: "Does it really matter what we do? Can someone tell me how we're all going to pay off this massive debt?" The weight of the question stunned the others into contemplative silence.

To better inform myself, I asked a banker friend the same question. He answered: "Look at what happened in Greece. It's your pension and savings that will be targeted. It's better to have quite a bit of cash at home just in case!"

An increasing number are disputing that continuing with the lockdown, protecting the NHS and saving lives is the right way forward. Bubbling under the surface is a worrying and deep-seated concern about short and long-term economic survival.

A recovery strategy, not just an exit strategy, needs to be made clear. Many people are becoming desperate for clarity about the immediate future and want to know what they'll do when their money dries up. Even an indication of when schools might restart would help alleviate the anxiety of many parents who are desperate for work.

If great care is not taken the 'fear in town' could foreseeably tip from a matter of public health into a state public disorder and this is a state of contagion none of us wish to see.